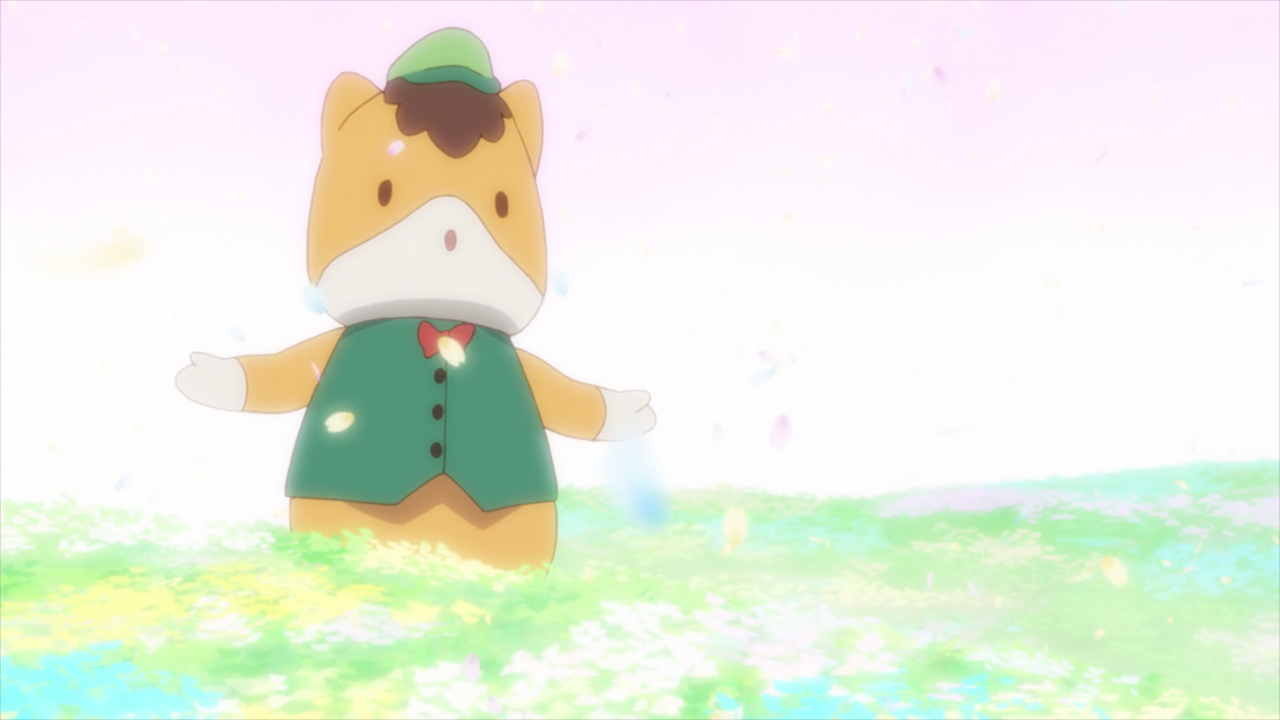 The label ‘Ogura’ (小倉) on a dessert usually means it’s red bean flavour. Ogura’s a place, and specifically a town or area or something near Ogurayama (小倉山), to the northwest of Kyoto. They make the best red beans, or something. Similar to the way that ‘Uji’ (a city to the southeast of Kyoto (Kyoto, man, just rocking it)) is sometimes used as a byword for matcha flavour. Don’t get confused with Kitakyushu’s 小倉, which is read ‘Kokura’.

Shrines are ranked by importance or whatever else. Ikaho Shrine happens to be prefecture-level (which is absolutely nothing outstanding whatsoever). I won’t get into it (especially since the sign didn’t even make it into the subs), but you can look it up if you want.

開運子授 shows up on a couple of signs at Ikaho Shrine, but it isn’t translated. In case you wanted to know, it’s just a fertility wish of some sort.

The really impressive sunshine and cloud stuff this episode is referred to by Kokona as 天使の梯子 (‘tenshi no hashigo’, literally ‘angel’s ladder’). I’ll be honest: I have no idea what these are called in English. I have heard them referred to as ‘God rays’, but that’s usually in a sort of humorous video game context. I’ve never heard any other term for them, because I rarely see them, and when I do, I mean, I just point. I don’t call them out by name. Properly they appear to be referred to as ‘crepuscular rays’, but let’s be real, who’s actually gonna say that? The Japanese equivalent there would also be 薄明光線, which isn’t what was said. 天使の梯子 is more colloquial, so I had to find an analogue. The direct ‘angel’s ladder’ translation appears only to be used by weeaboos (i.e., it’s only used as a translation from Japanese, and never in native texts). ‘God rays’ are a real term, but are mostly computer graphics limited. There’s also ‘angel rays’, ‘Jesus rays’, and whatever the hell else. We do try to limit explicit mentions of God and Jesus, though (you won’t find ‘Oh my God’ anywhere), since it’s too explicit a cultural reference. Ultimately, I settled on ‘Jacob’s ladder’ (again, I’ve never actually heard any of these terms, so I can’t gauge how common they are relative to each other). I wanted to keep ‘ladder’ around if possible, and Jacob, while a biblical dude, is passable in my view (esp. compared to ‘Jesus’ or ‘God’). And what it has over ‘angel’s ladder’ is that it appears to actually be attested in English. ‘Angel’s ladder’ isn’t terrible, honestly, and I could probably go either way. That’s just what the reasoning was this week.

There’s something on a big monument or something about Ikaho being Japan’s first planned resort. It’s not really too interesting so I didn’t look very carefully, but my understanding is that the town was designed around the hot spring in a bit more of an artificial manner than most resort towns, which cropped up more organically. Honestly, don’t ask me.

Power spots I don’t really want to talk about. It’s really exactly what it sounds like (vague, poorly defined, nebulously good). If you watched the first two seasons, you know.