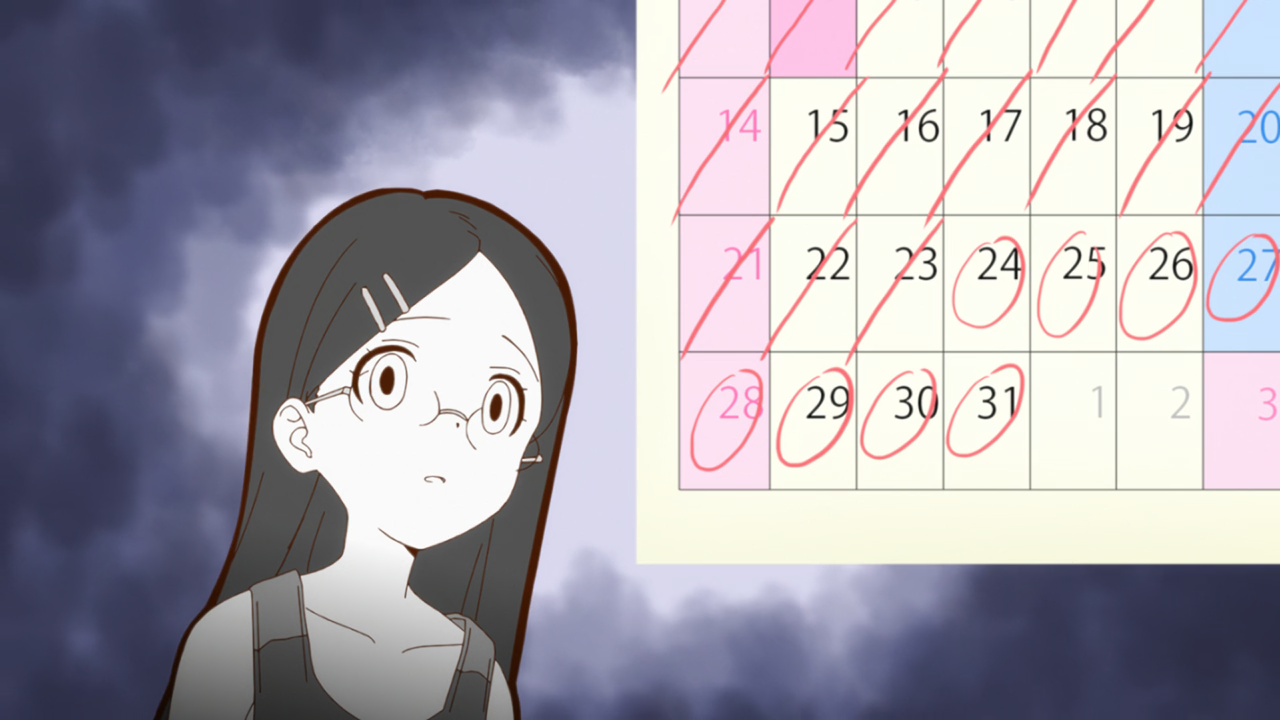 Grilled (or ‘roasted’ or whatever the hell) manjuu (焼きまんじゅう) is a Gunma specialty.

You all know the Chinese zodiac signs, right? The Japanese one is a bit different from the standard (the Chinese, of course, being the standard). In particular, it has specifically the Sheep instead of the ambiguous [Goat/Sheep/Caprid] that it is in Chinese, and also the Boar instead of the Pig.

Lighter on the notes this week, so have a bonus (extremely long) one. It’s about the show overall, though it happens to be extra relevant this episode. And it is: mountain names.

You may have noticed that the names of the mountains in this show kind of vary. In English we have overwhelmingly ‘Mt. Whatever’ (e.g. Mt. Everest, Mt. Fuji) or just the name ‘Whatever’ (e.g. K2 (coolest name ever), Aconcagua). Much, much less commonly, we have instances of ‘Whatever Peak’ (e.g. Lenin Peak), ‘Whatever Mountain’ (e.g. Split Mountain), and other random stuff (e.g. Muztagh Tower, Genyen Massif, Irazu Volcano, etc.), but these are in practice basically never used and pretty negligible. In effect, we’re limited to ‘Mt.’ as the only viable (apart from the null lack of one) prefix or suffix to a mountain’s name. None of the other options even come close to the frequency and dominance of ‘Mt.’.

Not so, however, in Japanese. Overwhelmingly (I hesitate to say exclusively, though I believe so), the Japanese have ‘Naninani Thing’, where ‘Naninani’ is some name or descriptor (nearly the same thing in Japanese), and ‘Thing’ is any of [Ridge/Peak/Mountain/Plateau/Etc.]. I don’t believe any Japanese mountains have only names with no delineator; that’s just the way the language works. Certainly all of the 百名山 are so labelled.

In any case, just in the show already (and these examples probably aren’t exhaustive, nor are they all in the subs: some show up only in small signs here and there that don’t always get translated), we have numerous 山s (富士山, 赤城山, 天覧山, 高尾山), a handful of 岳s (谷川岳, 駒ヶ岳, 鈴ヶ岳), a 峠 (三つ峠), a 嶺 (朝香嶺), and even an 丘 (つつじヶ丘). The 丘 (‘oka’) is fine, since it reads ‘hill’ and not really ‘mountain’ (note the lack of a 山 radical in the character. Is that a reasonable criterion? Well, it’s the one I’m using.), and so I just ignored it and left the one instance as ‘Tsutsujigaoka’. It was more or less just a place name that episode too, so no worries. But the other four? Well, let’s take a closer look.

山 (‘yama’, or ‘san’/’zan’) is the easiest one. Very common (it competes with 岳 for most; note already that we have nothing with the singular dominance of ‘Mt.’), and directly translates to ‘mountain’. In an absolutely terrible and unsound proof by example, consider 富士山, Mt. Fuji. Call 山s ‘Mt.’, easy.

峠 (‘touge’), meanwhile, presents more of an issue. I left this untranslated: you will find ‘Mitsutouge’ in the subs. One reason is that ‘Mt. Mitsu’ sounds dumb. Another, better one is that 三つ峠 is fundamentally a different type of name from the likes of 富士山. 富士山 runs pretty obviously as ‘Fuji Mountain’ (‘Fuji’ being of unknown origin, but possibly directly from 富士 (‘many soldiers’) or indirectly or partially from 不死 (‘immortal’), both read ‘Fuji’ and both stemming from the Tale of the Bamboo Cutter (read it if you haven’t, or just play Imperishable Night)), but 三つ峠 is not ‘Three (‘Mitsu’) Mountain’, but rather ‘Three Mountains‘ (or ‘Peaks’, or whatever), because ‘Mitsutouge’ actually refers to a collection of three different peaks (開運山, 御巣鷹山, and 木無山; note that they are all 山), the same way Mt. Akagi isn’t a real mountain as Kaede explains this episode. Of course, ‘different’ is up to interpretation, and the Japanese have traditionally been pretty lenient with what they refer to as mountains, but it doesn’t affect the point too much. Which is that 峠 in this case really doesn’t translate to ‘Mt.’. In fact, Mitsutouge is actually sometimes referred to as 三つ峠山. If they ever call it that in the show, you’ll find ‘Mt. Mitsutouge’ in the subs, but they haven’t yet. Anyway, that’s why Mitsutouge is the way it is.

‘But tsuru, that doesn’t actually answer anything about 峠 at all! Those are obviously just conditions specific to 三つ峠!’ Yeah, you’re right. If we see another 峠, better than even odds it ends up as ‘Mt.’.

Which brings us to the remaining two: 峰/嶺 (‘mine’) and 岳 (‘take’/’dake’). They mean ‘ridge’ or ‘peak’ or whatever else, but the point is that they do not directly mean ‘mountain’ as 山 does. But I translate them as ‘Mt.’ anyway. Why? Because I have no other options: ‘Peak’ and the like are kind of dumb, ultimately. The only real choice is to leave the names as they are, only romanizing them, and then you’d have ‘Tanigawadake’ directly for 谷川岳. I opted for ‘Mt. Tanigawa’ instead, and the same for 駒ヶ岳 (‘Mt. Koma’) and 鈴ヶ岳 (‘Mt. Suzu’). Unlike Mitsutouge, though, 谷川岳 actually does basically mean ‘Tanigawa Mountain’, and so ‘Mt. Tanigawa’ is sensical and fine. ‘Tanigawadake’ is fine, and doesn’t sound too odd, but where do you draw the line? Do you limit it, arbitrarily, to 岳, or do you also apply it to 峰 and 峠 and 山? Do you end up calling the big boy ‘Fujisan’? Maybe you do! But not in these subs.

Again, you could be consistent with it and just have ‘Tanigawa Peak’, ‘Koma Peak’, and the rest, but it sort of ends up weird. You’d have Aoi saying things like ‘We climbed Tanigawa Peak’, and it just doesn’t sound right compared to ‘We climbed Mt. Tanigawa’ or even ‘We climbed Tanigawadake’. Further, that doesn’t really solve the issue, because then you just have ‘Mt.’ and ‘Peak’ as your two options for your some handful of Japanese terms, instead of having just ‘Mt.’: you still don’t have enough.

Side note: 駒ヶ岳 (‘Komagadake’) is ‘Mt. Koma’ and not ‘Mt. Komaga’ because that ヶ (‘ga’) is just a particle (like の), not a real part of the name. Same for 鈴ヶ岳 and any other time ヶ shows up (unless, of course, the whole thing’s untranslated, like Tsutsujigaoka).

Long story short, more or less all denominators with a 山 radical get rendered as ‘Mt.’, except under unusual circumstances (of which the only example so far is Mitsutouge). Which means we get four different words condensed to ‘Mt.’. So it goes. A lot of words to say that I just slap ‘Mt.’ onto basically everything, but there you have it.

Just to be perfectly clear, constructions like ‘Mt. Tanigawadake’ are utter abominations. Don’t do that.

Bonus bonus: 峠’s other meaning is ‘pass’, which in the one sense is quite similar the meaning of ‘summit’ (you cross over it and things change), but in another is not at all (it isn’t the highest point, but in fact usually the lowest point subject to certain constraints). It’s a whole other can of worms figuring out whether a given place name means ‘Whatever Pass’ or ‘Whatever Peak’.

Bonus bonus bonus: 山 can be read as ‘san’ or ‘yama’. Sometimes there’s only one that’s acceptable (天覧山 is always ‘Tenranzan’, 富士山 is always ‘Fujisan’), but sometimes both are (赤城山 can be either ‘Akagisan’ or ‘Akagiyama’ (though some people appear to be mad about this)). In this episode, both readings show up back to back: Aoi says ‘Akagisan’ and Honoka uses ‘Akagiyama’ in her reply. Neither thinks this is weird, and it ultimately isn’t really a big deal. But this is something that’s very difficult to translate (off the top of my head, you could do ‘Mt. Akagi’ and ‘Mount Akagi’, but that’s a purely written distinction), and I’m throwing it in as a point of interest.