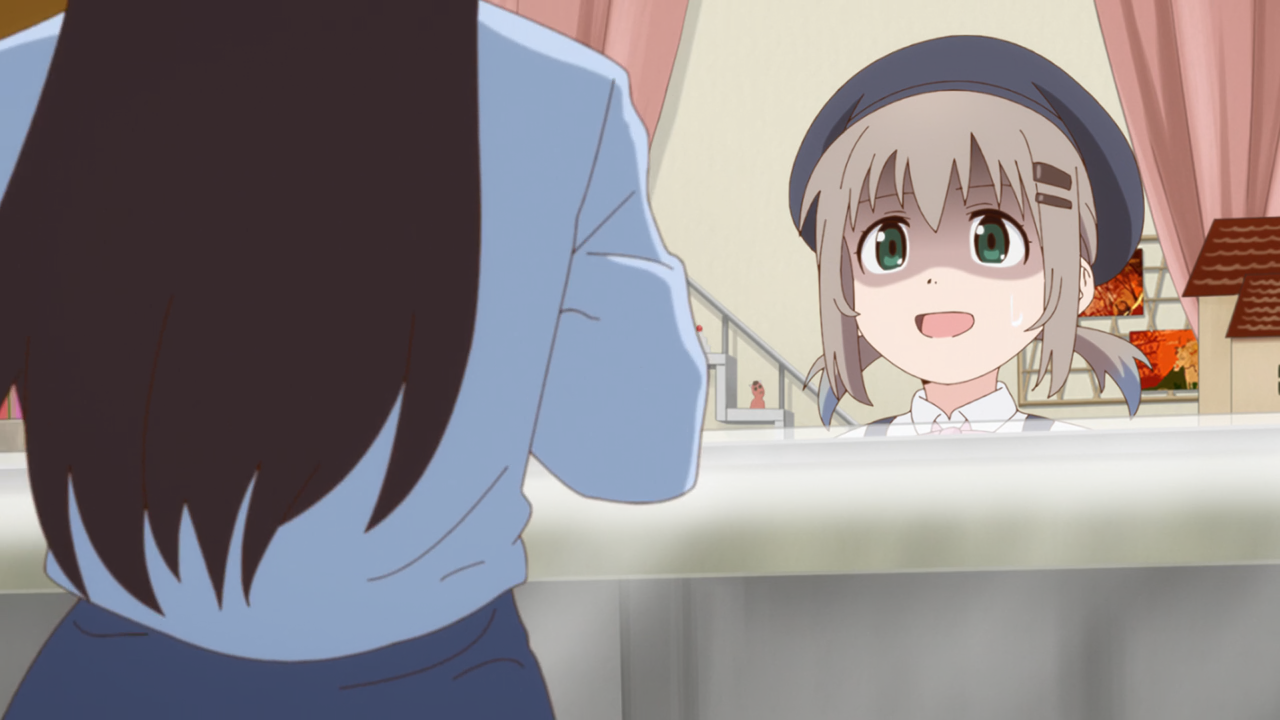 Right off the bat, a fun one. インスタ映え’s something about getting and/or posting good photos for/to Instagram. The amusing thing is that it’s read ‘Insutabae’; your Insta bae may be something rather different.

The title is ‘働かざるもの、登るべからず!?’, rendered in the subs as ‘She Who Will Not Eat Shall Not Climb?!’. This is a variation on the standard phrase ‘働かざる者食うべからず’, meaning ‘those that do not work should not eat’. Fairly common phrase in Japanese, though it appears to have been popularized in a socialist context, primarily quoting Lenin. The ultimate origin of the phrase, though, in both English and Japanese (and Russian, which Lenin used), is the New Testament. From the hand of the Apostle Paul, we have: ‘For even when we were with you, this we commanded you, that if any would not work, neither should he eat.’ (2 Thessalonians 3:10).

Hikari’s right about eierschecke being composed of ‘eier’ and ‘schecke’, but she might not be entirely correct about the etymology overall, which is disputed and unclear. ‘Eier’ is certainly ‘egg’, that’s firm enough. But ‘schecke’ is a little trickier. In German, ‘schecke’ does mean mottled, but it appears to be primarily used in the sense of ‘piebald’, as in, mottled like a coat. As in, for animals, and especially horses, rather than for things. A quick search through the terrifying German Internet seems to indicate a different origin. One theory is that a ‘schecke’ was an old-school German tunic, which was worn with a belt. You’d then have the section above the belt, the belt, and the section below: three parts, the same as the eierschecke. One of the problems with this, though, is that the schecke dates to the 1300s, while the eierschecke also dates to about that time, so this isn’t actually a problem (whoops). Another theory suggests that the old meaning of ‘schecke’ (reminder: it currently means ‘mottled’) was actually ‘streaky’, and so the dessert was named after the three streaks in it.  There actually also is a reference to Hikari’s mottled-top theory, but who knows? Not me, I’m no German baker.

Yes, that is Yankee Doodle that Kaede’s singing. The Japanese took the tune and wrote a mountaineering song about the Alps. The Japanese Alps, that is. The title of the song is アルプス一万尺, in case you’re interested. What’s that? Why? I don’t know.

Hariti is a Buddhist deity. In Japanese (and Chinese), she’s known as 訶利帝 (‘Karitei’), a phonetic translation. But more commonly, the East calls her 鬼子母(神) (‘Kishimojin’), meaning ‘(Divine) Demon Mother’. Long story short, she was a demoness with a bunch of kids, the Buddha beat her up, and then she became a protective maternity deity. Note about the name: it’s properly read ‘Kishimojin’. However, in Toshima, Tokyo, which contains Ikebukuro (and is thus where Hinata goes this episode) and has a ton of Kishimojin stuff, there’s a train station that reads Kishibojin.

The straw horned owl thing is a horned owl doll made out of straw. Surprise, surprise. To be specific, it’s made out of ススキ (‘susuki’, Japanese silver grass (no relation to the bakery, probably)). The Japanese call the horned owl ‘ミミズク’ (‘mimizuku’); as a result, that toy’s called a すすきみみずく, ‘susuki mimizuku’ (Japanese: it’s easy!). As mentioned before, Hinata goes to Ikebukuro (in Toshima), and the susuki mimizuku is that region’s specialty toy thing. It’s a 郷土玩具 (‘kyoudogangu’, rendered as ‘traditional toy’), which is sort of the toy/object version of the food 名物. Like 名物, they make good omiyage. For reasons, some Kishimojin temple in Toshima sells susuki mimizuku, so you can go out there and buy some (or just get them from the train station). I have no idea what’s cause and what’s effect here, but Toshima, susuki mimizuku, and Kishimojin are all associated.

Finally, I call the Mont Blanc a cake a few times this episode, because of the way the Japanese is. The Mont Blanc isn’t really a cake. The base maybe could be, though I don’t believe it has to be, but anyway, just putting that out there. Don’t at me about that.