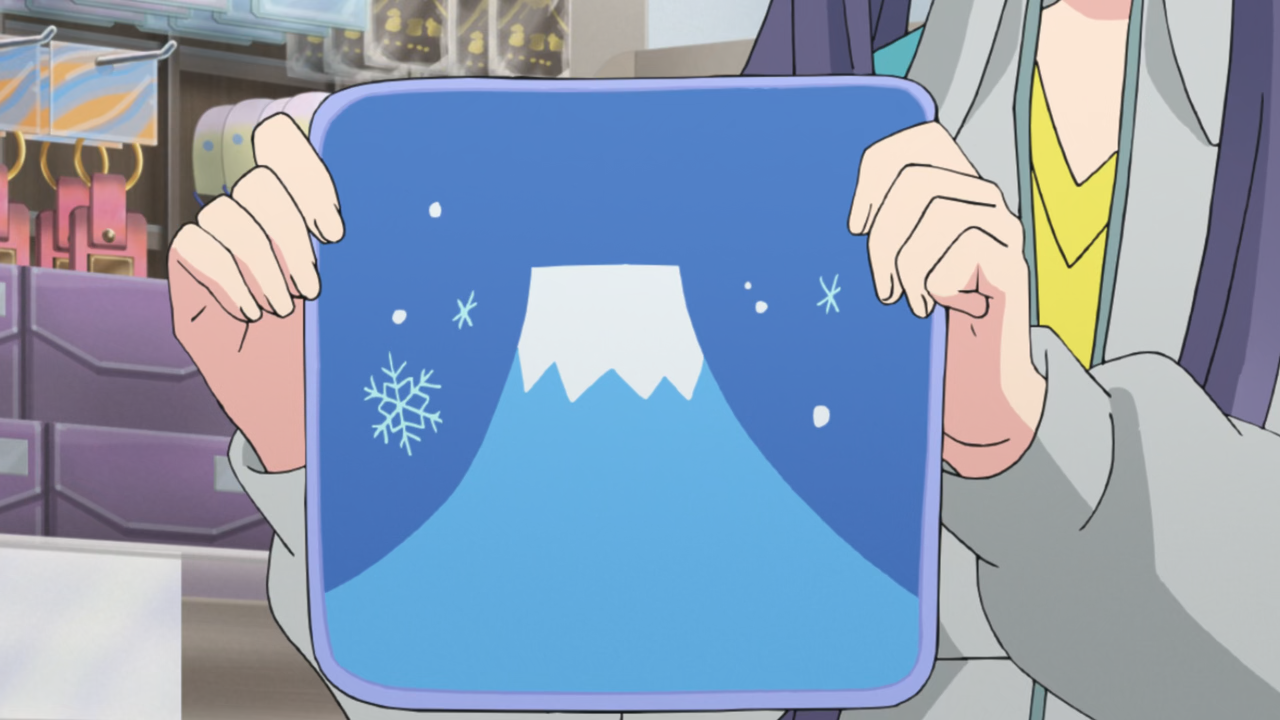 The girls are in the town of Nanbu this episode. Relatedly, the drunkard’s brother is drinking Nanbu tea (and later, Shizuoka; his sister similarly switches between a Yamanashi wine (from Koushuu) and a Shizuoka beverage (perhaps shouchuu)), from the region (though I don’t believe of any particular renown). The guy on the horse is Nanbu Saburou Mitsuyuki; his family name being the town’s, Mitsuyuki being his actual given name, and Saburou just indicating that he was the third son.

The Oosawa Collapse (大沢崩れ) is a natural feature on Mt. Fuji where the side of the mountain’s kind of slid off a little bit. Oosawa (大沢) is actually also a descriptor and not really a true name as such (briefly discussed also in the post for Yama no Susume Third Season Episode 8, though that’s mostly complaining about translating the analogues of ‘Mt.’) and translates to ‘big valley’. ‘Big Valley Collapse’ sounded stupid and the line between names and descriptors is often blurry in Japanese, and so it’s been left as Oosawa Collapse, pretending that the first half is a name.

But another feature is also mentioned, that being the Yoshida Valley. In Japanese it’s actually the Yoshida Oosawa (吉田大沢) or ‘Yoshida Big Valley’. ‘Yoshida’ is a pretty clear name (you could read it as ‘Lucky Field’, but ‘lucky’ isn’t really much of a physical descriptor, and Yoshida happens to be within the twenty most common last names in Japan), and here 大沢’s position in the latter half of the word suggests that it’s being used as a noun. So it is that back to back, 大沢 gets rendered once as ‘Oosawa’ and once as ‘Valley’. Just how it shakes out.

Finally, なんのこっちゃ (‘nannokoccha’) is a stereotypical Kansai interjection that means something like ‘What [is that / was that / did you say / are you talking about / etc.]’. The ‘ko’ in ‘koccha’ comes from ‘koto’ (‘thing’); ‘ko’ is also the word for child (子; and this often has a connotation of girl, specifically). ‘Nanno’ is just ‘what’, and so the pun is to read it as ‘What [i.e. where] girl are you?’. We went with ‘You what, mate’ as the equivalent of a stereotypical accented statement of confusion.